During the communist rule, from February 1948 Revolution until Velvet Revolution in Noveber 1989, thousands of Czechoslovak citizens left the Republic.

In the period of unlawfulness the communist regime violated basic human rights, which it was bound to adhere to by signing international agreements. As soon as 1975, the president of the Czechoslovak Socialist Republic Gustáv Husák, signed the International Pact on the Civil and Political Rights and the International Pact on Economic, Social and Cultural Rights. Both documents were ratified by the Federal Assembly of the CSR and after its publication in the codex of law in 1976 came into effect. However, the commitments of the representatives of state power were not realized in practice and only stayed on paper. The political leadership of CSR did not even respect the Universal Declaration of Human Right, where , in Article 13 is says: „Everyone has a right to leave any country, even his own, and return to his own country.

To exit the republic, a person needed a leaving appendix to his visas. This leaving appendix was in fact a stamp in a passport which stated where and for long is the person allowed to travel. Citizens who were trying to obtain it were inspected to a very fine detail. The members of parliament and the officials of the Communist Party of Czechoslovakia were not inspected at all when it came to leaving the country. The leaving appendix was an inseparable part of a travel document. Such measures secured a nationwide overview of the issuing the permits to enter capitalist states as well as securing an operative and thematic overview about these trips. Apart from the appendix, the person who wanted to leave had to acquire a foreign exchange promise. This was a written permission from the bank for the Exchange of certain amount of Czechoslovak crowns for a foreign currency needed to travel to capitalist nations. The Czechoslovak National Bank announced the allocation or refusal of foreign currency once a year (usually at the beginning of the year). The applications were usually submitted a year in advance. A regular citizen without the influence of the Communist Party of Czechoslovakia and connexions could wait several years before being approved. Every citizen could submit an application, but those submitted by „unreliable“ people were always denied with the explanation that their leave is „not with the accordance of the state interests of the CSR“. The decision of who is allowed to obtain a foreign exchange promise lay in the hands of the party authorities. Therefore, only a specific group of people could travel abroad without problems.

In the years 1977-1979, over 400 a year attempted to emigrate. Beginning in 1980, the emigration attempts began to increase. The travel agencies organized educational trips, although many participants did not return back from them. The managers of the trips attempted to mitigate emigration, among other measures, by confiscating the passports of the participants. Vacation trips to Yugoslavia were used to the same extent. A weekend trips to Vienna by boat were also organized. From 1983, the number of émigrés started to slowly decline, since the State Security Service tightened up inspections and refusal of people who applied for a foreign exchange promise or leaving appendix. The unauthorized leaving of the republic was, according to Article 109 of the Criminal Codex, considered a crime and was punishable imprisonment for 6 months to 10 years.

According to Article 110 of the Criminal Codex, the unauthorized entry of the republic was considered a crime punishable by imprisonment for 6 months to 3 years. 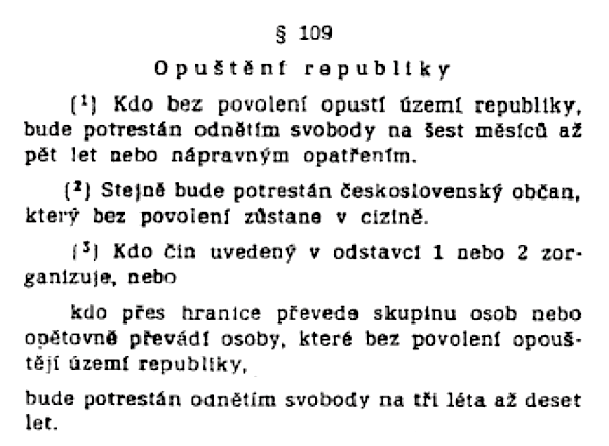 According to Article 110 of the Criminal Codex, the unauthorized entry of the republic was considered a crime. This mostly applied to citizens of the Polish People´s Republic (PPR), Hungarian People´s Republic (HPR) and German Democratic Republic (GDR). This was punishable by imprisonment for 6 months to 3 years.

In March 1985, Mikhail Sergeyevich Gorbachev was elected General Secretary of the Central Committee of the Communist Party of the Soviet Union. In relation with his reforms of the party and the economy (perestroika – rebuilding, glasnost – lifting of censorship – accelerating economic development) the number of émigrés in 1986 increased immediately. The political and social changes which were on-going in Hungary and Poland from spring 1989 contrasted with the reluctance of the officials of the communist parties to negotiate with the representatives of the opposition in the remaining countries in the socialist bloc, resulted, in the year of the Velvet Revolution, in a dramatic increase of émigrés. In the total number of 1 308 émigrés, 1 013 were foreigners. On the basis of international agreement Hungary opened its borders with Austria. On 11 September 1989, Hungary terminated the bilateral agreement with GDR referring article 6 and 12 of the international agreement. The citizens of GDR poured into HPR and were going to West Germany through Austria. The ones who did not have authorization to travel abroad to Hungary, were detained and brought back by Czechoslovak border guard (since Czechoslovakia did not terminate the bilateral agreement. In nearly 3 months of 1989, the Czechoslovak border guards returned approximately 700 citizens back to GDR. From 1977 to 1989 there was 9 556 attempts to illegally cross the border, out of which 7 361 were citizens of Czechoslovakia and 2 195 were foreigners. In Slovakia, more then 16 000 people were sentenced for an unauthorized attempt to leave the republic.

The authorized crossing of the border was categorized as a crime in all criminal codes of CSR until 1989. From 1976, this classification was in direct contradiction of Article 12 of the 3rd part of the International Pact on civil and political rights (A UN document A/RES/2200/XXI Annex or decree of the minister of foreign affairs No. 120/1976) which was legally binding for CSR.